Bizet scored the main role of his opera for mezzo-soprano. Interestingly it was first performed  in Malta by Ida Cristino who was a soprano. Not surprisingly,  the opera was in Italian translation rather than in French. Apart from this being an Italian cast, few people in the audience would have understood French and all were familiar with the Italian language.

The two libretti printed in Malta, both undated, probably date from the 1880s. One is in English, the other in Italian. This catered for the British audience, as well as the Maltese who for the most part prided themselves on their Italian culture.

Maltese synopsis, translations of operas, and even plays based on the subject also began to appear with the production of each opera. The Maltese people of different strata of society thereby also became familiar with opera. 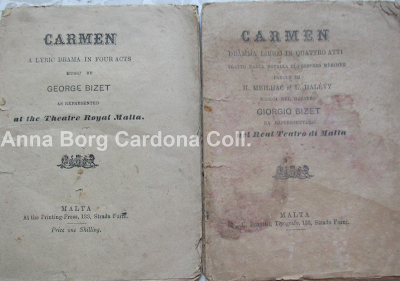 I wish to add a link to a project and publication that traces the performances of Carmen around the world and explores the ways each was adapted to cater for its own audience. Makes interesting reading!

You can also listen in to a discussion on the subject from the University of Southampton, on the 'Music at Southampton' Facebook page:

MUSIC IN MALTA from Prehistory to Vinyl - FPM EXHIBITION 2019

Years of work went into this Exhibition but it only lasted for a short two months. The instruments - some very special, others unusual or unexpected  - were exhibited under one roof in the Mdina Cathedral Museum.  They came together from different collections,  both public and private. The large number coming from private collections are not likely to be seen together again. I have no doubt that Malta would do well to have its own Music Museum. This is dream that I hope will become a reality!

FPM | Exhibitions | Music in Malta FROM PREHISTORY TO VINYL (patrimonju.org)

Tracing the history of music in Malta (timesofmalta.com)

The ORPHEUM THEATRE in Gzira

Designed in 1932, the ORPHEUM THEATRE was originally a cinema as well as a theatre. Dramatic and operatic performances were put up in this theatre featuring some of the most famous figures of the time.

On Saturday 19 and Sunday 20 November 1949 there were two evenings of Recitals with the Orchestra Valente opening each half of the programme. On these memorable evenings TITO GOBBI's name was given prominence. He sang Handel's 'Lascia ch'io pianga' from Rinaldo, Mozart's 'Non piu andra'i from Nozze di Figaro, Rossini's 'Largo al Factotum' from Il Barbiere,  as well as Tchaikovsky, Tosti, Verdi and Giordano. However, on the same evenings, the Maltese tenor ORESTE KIRKOP was also singing Verdi's 'La donna e mobile' from Rigoletto,  'Che gelida manin'a from La Boheme as well as De Curtis and Giordano. Together Tito Gobbi and Oreste Kirkop sang a duet from Act IV of  Puccini's La Boheme.  The soprano ALICE TONNA also had her moment with Tito Gobbi, singing the duet from Act II of Verdi's La Traviata. What an evening it must have been for those who attended! 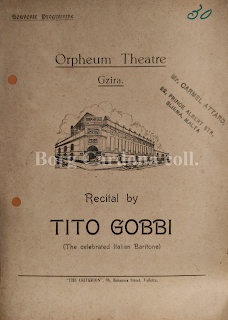 This year COVID has deprived us of all public gatherings, including the celebration of the feast I always look forward to so much - L-IMNARJA. This is a distortion of the word 'Illuminaria' because the Mdina cathedral and surroundings were traditionally illuminated with an impressive number of candles and fjakkoli on the eve of the feast. 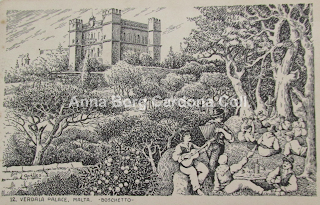 
This celebration usually started on the 28th of June, when people gathered in the gardens of Buskett, the little forestation created by the Grandmasters of the Order of St John. There they sang the night away, feasting on rabbit and drinking wine. This is one of the occasions when folk singing known as għana can still be heard to the accompaniment of guitars.

As from 1857, through the initiative of Governor William Reid, the festivity also came to be associated with an exhibition of animals and agricultural products, for which prizes were awarded for the best exhibits. The Societa Agricola, established in 1844 with the intention of encouraging the farming communities, organised this event and continues to do so.

The following morning a Mass in the Mdina Cathedral celebrated the feast of Saints Peter and Paul followed by a procession. 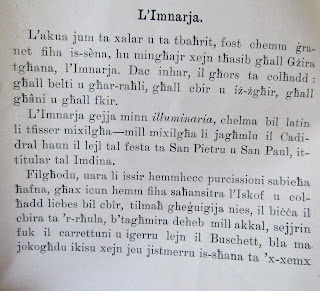 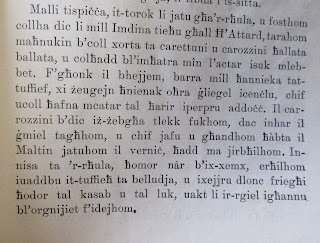 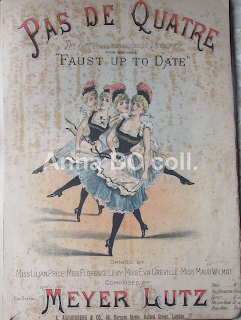 
This sheet music with a very attractive cover was sold locally at the outlet MUSIC DEPOT, 40 Strada Mezzodi, Valletta. This was the piano solo arrangement of the dance music in the Opera Burlesque 'Faust Up To Date' by the German composer Wilhelm Meyer Lutz who early in life moved to London.  The dance was apparently an 'enormous success'. So much so that the young ladies who danced it are also mentioned by name on the sheet music cover. Riding the wave of this music's popularity and that of its dancers, the composer made arrangements of it for Full Orchestra, Septet, Military Band and also Brass Band. Composers often exploited the popularity of their own music by producing different arrangements thereby making it accessible to a far wider public.

The Burlesque Opera  'Faust Up To Date' was written as a spoof of Gounod's Faust, and was first performed at the Gaiety Theatre in London on 30 October 1888.

The feast of St Gregory was not always celebrated as we know it today on the first Wednesday after Easter. It originally took place annually with a long procession on 12 March, in which litanies of the saints and hymns were sung (Mikiel Fsadni Id-Dumnikani fir-Rabat, 1974 p.258).  It took the form of a votive pilgrimage that according to Prof Stanley Fiorini may have originated as far back as the Black Death of 1360 which also visited Malta, as we know from documents in the Vatican. (Stanley Fiorini, “The South East of Malta and its Defence up to 1614” in The Turkish Raid of 1614 , ed. Ruben Abela (Malta: Wirt iż-Żejtun no. 68, 2014), 86.
The procession commenced in Mdina with the participation of all the dignitaries, clergy and confraternities and slowly made its way across the island towards Żejtun in the south, with other clergy, confraternities and faithful joining in along the way .

This occasion is registered every year in the Mdina cathedral documents of the seventeenth century with the comment ‘this year the usual procession of Pope St Gregory to Żejtun took place’ or simply ‘the usual votive procession.’ The cathedral records also show that a spinetta or a regaletto was carried and played through at least a part of the procession as far as the chapel of the Annunciation. Surviving anonymous St Gregory processional music from 1719 includes motets for SAT voices accompanied by 2 violins and organ (ACM, Ms 151A, Ms 579). Stringed instruments are very likely to have already been in use in earlier processions of St Gregory since these instrumentalists were in regular employment with the cathedral and their instruments were easy to carry.

Also associated with this feast, after the procession, is the folk merrymaking down by the seaside in nearby Marsaxlokk. This is where folk singing known as għana and guitar playing was always very popular.

This year the much-loved procession could not take place in its usual form owing to Covid 19 restrictions of gatherings. This is therefore the drastically-reduced procession led by the Archbishop that did take place through the empty roads, as seen in Zejtun (photos courtesy Not. J.H. Saydon 15.4.2020). A forlorn scene never witnessed within our lifetime.  Litanies invoking the Saints were recited with particular reference to petitioning the Lord to save us from this present crisis. 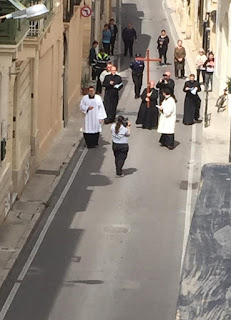 WELCOME to my blog!

I am, unfortunately, a collector of all things musical. This blog is reaching out to all the kindred spirits out there just like me!

To start off with, I thought it would be a great idea to share my Sheet Music Collection with like-minded individuals. I have a vast collection of 19th and early-20th century sheet music, but my research always revolves around things Maltese - in this case either music printed in Malta or music by Maltese composers. I will not easily part with my collection but if you have anything connected to Malta, I just may possibly be tempted! I will also be putting up a For Sale section for any doubles I may have. So please check that out every so often.

I have been adding Musical Instruments and I will be slowly adding on musical material to this blog, so I hope you will be returning to it periodically.

Anna Borg Cardona
Lifelong passion for Music and Art. B.A Graduate in English and French from the University of Malta (1978). Received diplomas in music teaching and in piano performing from Trinity College, London (1980). Pursued studies in Musicology at the University of Malta (1995-1997). Awarded Fellowship by the London College of Music for Professional Achievement in the field of musicology and organology (F.L.C.M., 2012). PhD Music, University of Southampton (2018). Author of three books and several articles in Maltese and foreign journals. Topics of interest - Maltese Musical Instruments, music and traditional song and dance; Musical culture and luthiering in seventeenth-century Malta. Guest curated Exhibition 'Whistles from Ritual to Toys' (2009). Contributed to setting up of Maltese section at Musical Instrument Museum (MIM), Arizona (2010). Guest curated Fondazzjoni Patrimonju Malti's Exhibition 'Music in Malta from Prehistory to Vinyl' (2019). Founder of Gukulari Ensemble, who have given performances in Malta, Budapest, Vienna, Bologna, Portugal, Spain.